Kysek Coolers vs Yeti – Is This A Better Cooler Than The Yeti? When looking at Kysek coolers vs Yeti I discovered that Kysek has some really exciting features and is definitely a cooler to rival the Yeti.

Released in 2014 the Kysek cooler offers a great roto-moulded cooler at a similar price to Yeti but with 2 key features that the Yeti is missing – bottle openers and inbuilt wheels.

In this comparison I’ll look at what makes the Kysek different (and perhaps better) than the Yeti and I’ll give you my honest opinion about which cooler I think is the better buy.

A Little Bit About Kysek

KYSEK (stands for Keep Your Stuff Extremely Kold) was started by John Gutierrez and is located in Madeville, LA.

After being discontent with any cooler on the market he went through all the major brands and discovered countless flaws in every ice chest. Thins spots that reduced effectiveness, too heavy to carry, slippery lids etc.

So he decided to design a chest that met all his needs, and maybe yours too.

The Features That Make Kysek Stand Out

At it’s heart Kysek coolers are roto-moulded coolers not too dissimilar from Yeti, Pelican or Engel. A super tough box that keeps ice 7 days or more.

It is bear proof, has non-slip feet and pull down rubber latches just like the Yeti.

But Kysek has some unique features that the Yeti doesn’t have and in my opinion makes it an even better cooler for basically the same price (it’s actually slightly cheaper).

I see A LOT of different brands of coolers and it takes a fair amount to get me excited about a new cooler brand. But when I saw the inbuilt wheels of the Kysek I was blown away. 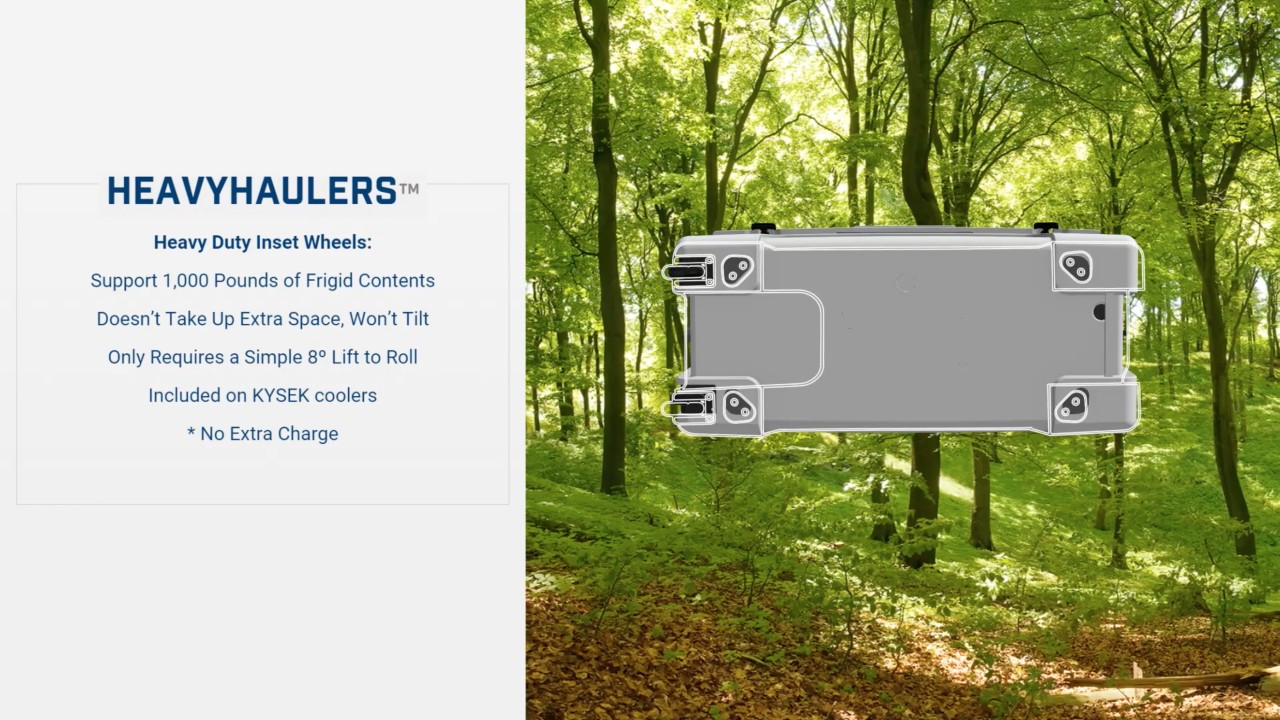 This is truly THE FEATURE that sets Kysek apart from any other cooler on the market so let’s look at it in a bit of detail.

The wheels come standard with any Kysek cooler (see the 35L here), except the 25L model which doesn’t have wheels.

The wheels are inline with the cooler and look a lot like rollerblade wheels. They can hold up to 500 lbs of weight each giving you a total weight capacity of 100 lbs.

The cool thing about these wheels is that when your cooler is flat they don’t touch the ground, instead the non-slip rubber feet do. It’s only when you tilt the cooler (8 degrees to be precise) that the wheels start working.

While these aren’t the big beefy wheels you might see on something like the Pelican, they will work fine in most cases. It will really just be the beach and soft dirt or thick grass that these wheels will struggle on.

I have hurt my back multiple times carrying my Yeti, to have wheels that comes standard (for less than the price of a Yeti) is like music to my ears.

This alone is almost enough for me to rate the Kysek over the Yeti, but lets look into some more features to see which cooler truly is the best option. Another frustrating thing about the Yeti is that it doesn’t have an inbuilt bottle opener. We have all been at a party where there is a cooler full of beer and no bottle opener in sight.

You can buy bottle openers from Yeti but these require you to screw through the outer plastic shell in order to fix the bottle opener in place.

The Kysek on the other hand has 2 bottle openers built right into the corner locking brackets. So you will never be without a way to open your beers.

Yeti has a 3/4 inch drainage plug that is completely detached. The plug allows you to drain the cooler with a partial turn or you can completely remove the plug for faster draining.

The larger drainage plug is especially good for emptying your cooler quickly but also getting out items like fish guts or dirt/debris that may have gotten into your cooler.

Yeti coolers have about 2 inches of insulation in the sides and about 2.5-3 inches in the lid.

The Kysek nearly doubles this and have 4 inches of insulation across the board.

I haven’t actually tested in myself nor could I find any ice tests so I can’t say for certain how well this holds ice. But I would definitely presume this would hold ice just as well as a Yeti and in fact is most likely to hold ice even longer due to the extra insulation.

Non-Slip Lid Doubles As Cutting Board Because of the quality of the non-slip feet and the strength of these coolers many fisherman are now casting from the tops of their coolers as well as using them as a cutting board.

Yeti coolers can be used as a cutting board but can become slippery when wet making them hard to cast off.

Kysek have a textured lid that doubles both as a cutting board and a non-slip platform allowing you to cast safely, even in wet conditions.

The Kysek has a ruler (both inches and cms) moulded onto the lid of their cooler.

While this is mainly used for quickly measuring a fisherman’s catch it can also be used in other circumstances too.

The Yeti doesn’t have a ruler on the lid Kysek coolers have two spots on the inside of their lid to place what they call smart accessories.

The main accessory at the moment is a temperature gauge that connects to your phone via bluetooth. This tells you how cold your cooler is and when it’s time for a refill.

While this could be useful for items that need to be kept frozen and you don’t want to have to open the cooler to check, I think this only applies to a small amount of people.

And for the ripe old price of $89.95 I can’t see many people actually buying this product.

When it comes to looking at expensive roto-moulded coolers price often plays a defining role. Most shoppers want to get the best bang for their buck and are hesitant to buy a Yeti if they can buy something just as good for less money.

Looking at the price differences between similar sized Kysek coolers and Yeti coolers you can see that Kysek cooler are in fact cheaper…but only just.

The Kysek cooler averages about $10 less expensive than it’s Yeti counterpart. Not a huge saving but think about all the additional features you are getting:

So when you add up all the extra features in the Kysek it does seem to be much better value for money. 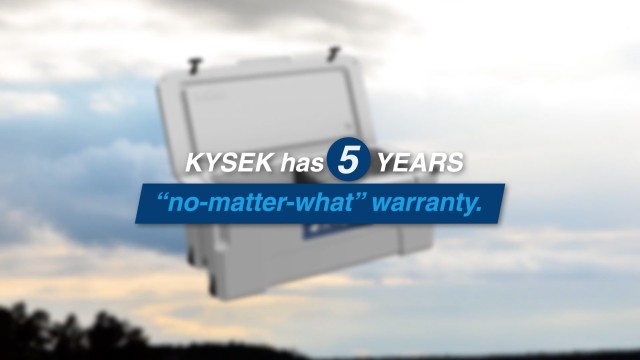 When it comes to warranty both the Yeti and the Kysek have a 5 year warranty that covers basically everything to do with the cooler.

So if something breaks (from a rope handles to a rubber foot) you know that your warranty has got you covered for 5 years after purchase.

Kysek vs Yeti: Which Cooler Is The Better Buy?

In my honest opinion I have to say the Kysek is hands down a better buy than the Yeti. 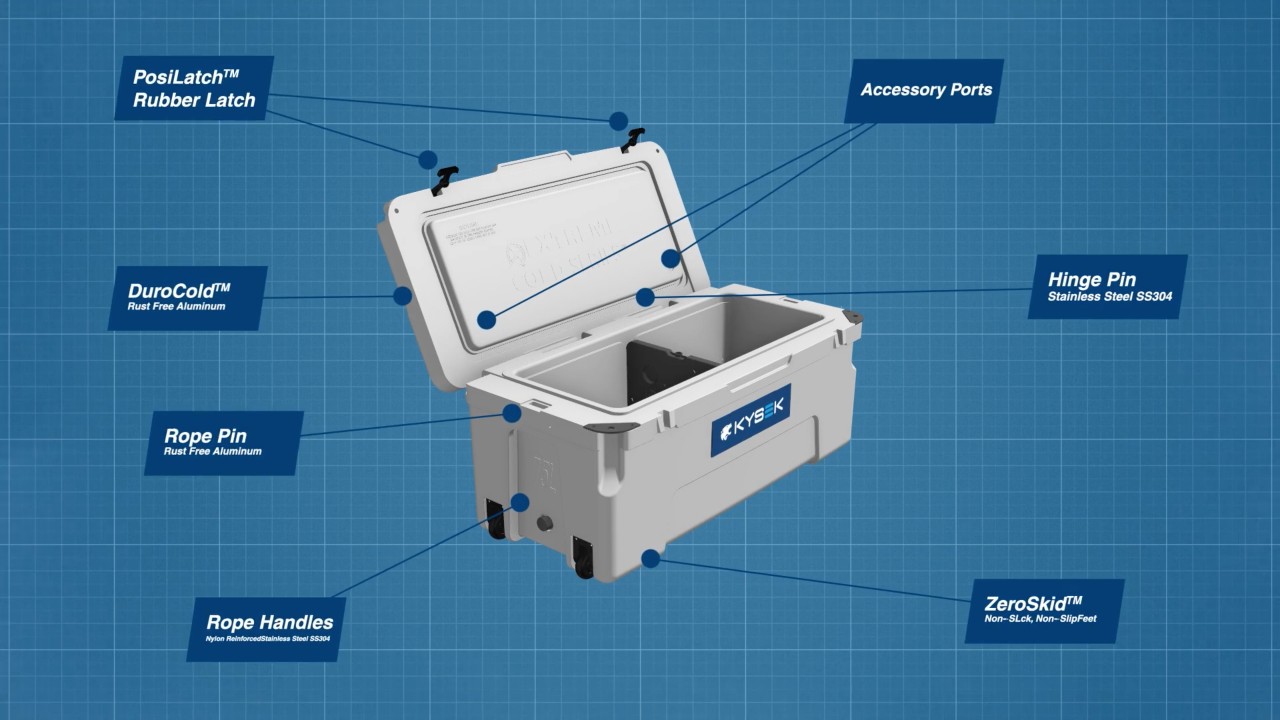 Assuming everything was the same the inbuilt wheels in the Kysek, which will basically save you loads of money on visits to the back doctor, would sway me alone.

But add to that the extra insulation and other extra features and I have to say I absolutely love the Kysek cooler.

I’ll have to do an ice test between the two coolers just to ensure that the Kysek performs up to the standard of the Yeti, but with extra insulation I can’t see why it wouldn’t.

So if you are looking at these two coolers aren’t 100% sure on which one to buy, I would definitely consider a Kysek.

Reasons For Buying A Yeti Instead

In saying that there are still some people that the Yeti will be more suited to.

The Yeti is a premium brand cooler with an amazing gloss finish. It looks like an expensive cooler more so than the Kysek.

I would advise you to buy a Yeti if:

You care about brand – Your friends already have Yeti’s or you like buying the best known brand in the industry then the Yeti is for you. Yeti is like the iPhone of the cooler world and owning one makes a statement.

You want to buy locally – Yeti coolers are located in specialty stores all around the country and chances are they will be really easy to find and buy in person. Kysek coolers will be much harder to find locally and will likely need to be purchased online.

Are you like me and prefer the Kysek, or would you rather buy a Yeti? The choice is ultimately up to you.

Click the links below to see the latest price on Amazon for these 2 coolers.

And until next time, stay cool!